The Importance Of The Minimalist Approach To Web Design

Minimalism has been an increasingly popular trend in the web design world. Designers may be tempted by bolder, feature-rich design because it might seem like the best way to engage user attention. Research, however, suggests that this is not the case. In fact, the same research suggests that visual complexity affects a user’s perception of the site within 50 milliseconds of exposure. Understanding this fact about first impressions can guide you to making the most of that time.

Users are most attracted to sites that have a clean design. Moreover, people are increasingly aware of a site’s usability. Modern users tend to favor designs that focus on necessary components and eschew distracting bells and whistles. While it may sound counterintuitive, minimalist design can offer higher user engagement, better usability, and appeal that is more aesthetic.

A Short History of Minimalist Design

Some web designers mistakenly regard minimalism as a primarily aesthetic choice. They neglect the fact that the ultimate goals of minimalism are usability and economy – the ability to do more with less. To avoid the pitfall of focusing only on aesthetics, it is important to understand the roots of minimalist design. While it may be a newer trend in web design, the underlying ideas have been around for much longer.

When discussing minimalist design, one of the first things people may think of is Japanese traditional culture. Because of cultural values that favor balance and simplicity, Japanese architecture, interior design, and graphic design have long employed minimalist aspects. The emphasis is on simple colors and design choices that promote functionality and a sense of calm.

As a Western movement, minimalism began early in the 20th century. Influenced by the introduction of modern materials, such as glass and steel as well as new building technologies, architects such as Mies van der Rohe began to employ minimalist designs in their buildings. Interestingly, Van der Rohe is credited with first applying the phrase “less is more” to design, making him an icon in the minimalist movement that shaped much of the modern era.

The less-is-more attitude quickly moved from architecture to other arts and industries – interior and industrial design, painting, and music. The central idea was to do away with any element that didn’t significantly contribute to the deeper purpose or function. As a preference for simplicity developed, so too did consumer products that employed the concept. Mid-century modern furniture did away with excess ornamentation and focused on clean lines. This carried through to the present with furniture manufacturers like IKEA offering simple, easy-to-use designs.

Minimalist web design began as a natural application of these principles in reaction to a trend of increasing complexity in web design. Unnecessary animations and Flash intros bogged down the user experience, and some web designers decided that it was time to return to the less-is-more mentality.

Minimalism was applied to web design first in the early 2000s but has recently seen a flurry of interest. The popularity of these designs is evident in the success of such sites as Squarespace and the demand for minimalist-inspired WordPress themes.

Even Google, the most popular website in the world, demonstrates minimalist principles:

The Google homepage is designed entirely around its central search function. Anything unnecessary to the function, other than branding, was eliminated. Branding is even more prominent. Not only is it one of the few visual elements on the page, but because the page remains uncluttered; it’s not distracting. Google’s minimalist philosophy is a great one to follow to improve user experience and promote engagement.

By: Our Copywriting Team | https://usabilitygeek.com/ 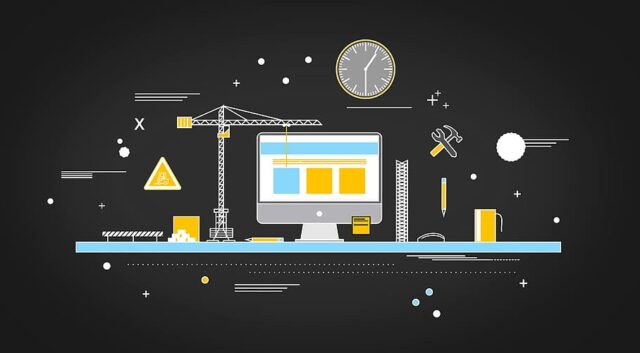